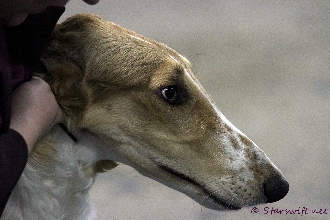 Agent is now a Grand Champion! Thanks to all the Judges who awarded this boy his due and special thanks to our friends who helped out the times Connie was unable to show due to physical difficulties. He is now ensconced as pack leader (so he thinks) and available for stud.

It's been a whirlwind year and Agent hasn't disappointed us once.  He finished his championship in high style taking back to back majors (one over specials) at the March 2016 Indy show.

Then, while on a roll we took him out for his debut outing as a special to the MBC specialty May 2016 at Kalamazoo, where he earned a Select for a 4 point major.

Agent is the most social, easygoing, and lovey boy you would ever want to meet.  Everyone and every dog he meets is his friend.  He has also become my best snuggle buddy while watching tv or reading.  He is just one of those dogs that makes you smile.  On top of all that, this substantial and well built boy is just plain gorgeous!

Agent attended his first AKC show on his 6 month birthday.  I couldn't be more proud of how well he did, not only in the ring, where he walked away with Reserve, but also with the crowd, noise and atmosphere of the show environment.  He felt right at home and made lots of friends.

We can't wait to see where this boy takes us.  Thank you Terri, Dale, Karen and Christina for bringing this boy into our lives.

Growing up and in the ring

This site powered by inPedigree